Had some excitement this afternoon when Sharyn and I went out to the back 40 to pick some produce from the garden (that's a panorama picture of the back 40 from my new sony camera...). We took Killian and Wilbur along for the run and were minding our own business in the garden when I went to reach for a jalepeno. I bent down with my face next to the black deer fence, happened to look outside the fence about 1 foot away and saw an interestingly patterned tree lying there. It took me a moment to realize that the "tree" was breathing! I believe my quote was "Holy shit. Holy SHit. Holy SHIt." Sharyn had no idea of what was going on and thought I had possibly seen a spider which frequently brings the same response out of me. This was no spider. Hell no! This was NO spider! 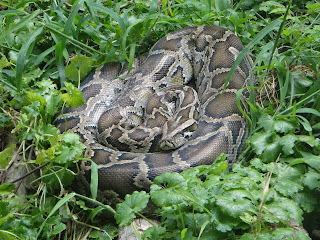 What it was was a SNAKE! Just 1 short foot away from my face was a 6 foot reticulated boa constrictor! Sharyn came over to see the anomaly before me and was sort of speechless. We grabbed both dogs and put them in the house and returned with a large dog crate which we managed to get over the now very pissed snake. 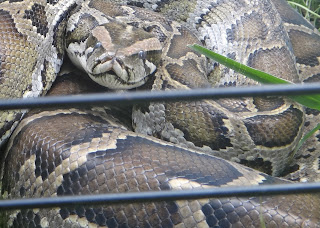 The call to the emergency line at animal control was rather interesting. Sharyn told the woman that we had a 6" boa in the backyard corralled. Perhaps not unreasonably, the dispatcher at animal control didn't quite believe us. Sharyn handed the phone to me where I repeated the story and reiterated that this was a b-i-g snake. She still wasn't gettin' it! She told me that if the emergency "team" would come out, but if it was a wild snake, they wouldn't do anything about it. Now, I know a bit about snakes and knew that this snake was not a Maryland snake but, alas, she still wasn't gettin' it.

So, 40 minutes later, during which Sharyn and I split snake-watch and Gert-watch, the "team" finally responded; it was a team o' one - one Pat McArdle responded to the call. He walked out to the back 40 with Sharyn who had met him in the driveway. He saw the snake and, I believe his quote was .... well, I can't really quote what he said but it contained the "F" word! He couldn't believe what he was seeing. And, he had walked up with a snake catching pole that this thing would have bent in two. So, we were in a bit of quandry about how to get said snake out of the dog crate and off to the Humane Society. 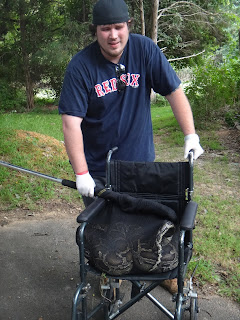 After a bit, Pat went to the truck and returned with a black bag which could be closed on an animal. Convincing a 6' boa constrictor to willingly enter a black bag took some doing but Pat was the man and finally got the snake secured safely in the bag. He weighed right around 40 lbs so we put him in Mom's wheelchair and proceeded to the van where the snake was secured for good. Whew! I was reassured that the snake would not be destroyed which was great - that was important to both Sharyn and me.

So ended our saga with the snake. I'm hoping it's one we don't repeat for a long, long time - make that forever.

UPDATE 8/31/11 - I got an email back from Pat McArdle. The beast was a python measuring TEN FEET LONG! Here's the email:

Thank you very much for the photos. The snake was a Python and it measured around 10 feet.

still very aggressive but they said thats the nature of this breed of snake.