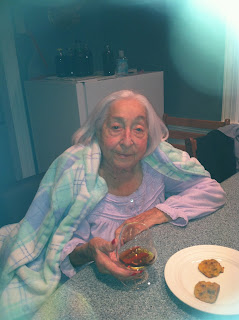 Those of my readers who have been checking in on Gertie's Galavants blog might be wondering about my rather long hiatus from writing this time. I've taken breaks before but never 2 months. Life has just changed significantly over here during the last two months but I will give an update today.

First off, Mom is still fine although we're coming to the end of the road. Her rehab from her broken hip went very well and she rapidly gained strength. She and I were delighted to get her home in December and she was, if not back to 100%, back to walking a bit between the kitchen and the living room where I had her bed set up. In fact, she was doing so well that I moved the bed back upstairs into her bedroom. I had plenty of friends dropping by and we even took a few trips out to lunch with Carina and Sharyn.

On January 24th though, she started to feel differently. Sharyn and I had been out for the day while Carina stayed with her. When we returned, she was very weak and slumped over in her chair, laboring for breath. Interestingly, she'd been fine earlier in the day but, when we returned, it was a very rapid decline in status.

I called hospice and the nurse came out immediately - she thought that we were coming to the end so I called Ron and Mike. But, as is typical of my Mom, she has rallied- sort of. Mike flew in the next day and has been instrumental in keeping me sane as we watch her come and go. She's still lucid and not in any sort of pain at all which is a total blessing.

Hospice instructed me to change her medications to comfort meds only. This meant that I was to hold everything except one blood pressure pill and a pill which helps with breathing. We added in morphine which actually helps relieve strained breathing and a "feel good" drug which relieves anxiety.

The hardest thing in the world for me though was to hold the Megace medication which increased her appetite. I'm a feeder. I was raised that way and that's who I am. My mom never failed to put together a tray of cheese and crackers when company dropped by and I have adopted the same attitude.

It was really very difficult for me to hold this medication while knowing that Mom would not eat nearly as well and would eventually weaken. I talked this decision over with my brothers, and we were all uneasy with this. I spoke again with hospice and got a new perspective.

As we age, our bodies slow in all ways. Food is digested much more slowly which is why the elderly might not be hungry as often as younger people. By giving Megace, Mom's appetite would out run her ability to digest food and would, in fact, make her feel bloated. So, at that point, Megace would not be a "comfort med" and would make her feel worse. Once I saw the whole picture, I got it.

This doesn't mean that I've stopped feeding though. John and I found a chocolate milk that she's wild about. It comes in the old fashioned glass bottle and we've had a few nice discussions about memories of having milk men deliver fresh eggs, bread and milk daily. She drank a whole bottle in two days so I sent Mike and Sharyn off yesterday in search of more which they found.

So, that's pretty much where we are. I can't say enough about the wonderful hospice workers we have coming in daily. Mom receives baths in bed 5 days a week (I premedicate her as she's still a fighter...), a nurse is here every day and, of course, I have the best friends and family in the world. Andi and Howie stopped by a few days ago and spent the whole day with us. What a nice time that was.

Although this is a sad time, it's also a very interesting and amazing time. Mom's rally moments are quite amazing. And, even her down times are sort of amusing - if you keep your sense of humor which, thankfully, I inherited from her.

For instance, here's a typical morning:

Set the stage - 4 am, I'm on the sofa watching her, watching tv. She sits straight up in bed and says "Good Morning, Sweetheart! COFFEE!"

Me: You want coffee now??
Mom: Yes (with rising intensity): COFFEE!!!!
Me: Ok, I'll be right back. I go to the kitchen and make her a cup of fresh coffee. This takes approximately 3 minutes, round trip.
I enter the living room with a steaming cup of coffee.
Mom: Jesus Christ! Where have you been?!
Me: I went to the kitchen to make you coffee. I've been gone 3 minutes!
Mom: Thank God! I haven't had coffee in days!

Short term memory loss is an amazing thing. Now, to get the full impact of this situation, you have to understand that the exact conversation (minus the time of 4 am and the Good Morning, Sweetheart..) goes on about 4 times a day. She forgets I was around at all until I reenter the room. Never fails to crack me up.

So, that is the up to date story. I will start new blog entries with a status update and then try to write as I normally would. I really haven't been writing a lot lately - just haven't felt like it. I was honored though the other day to find one of my articles selected as lens of the day on Squidoo. Here's the one that hit that high honor (note, there are over 2 million articles on Squidoo):

Taking a Cruse with the elderly

And, here's a few other articles that I've managed to squeak out:

And, the one article that was the hardest to write:
The long goodbye, when your job as a caregiver is coming to an end

So, that is that. I'll update as often as I can. And, you can look forward to the following blog posts:

Mom's 95th birthday party
John's new boat and my trip into the Chesapeake Bay's 38 degree water
Posted by Unknown at 10:25 AM 1 comment: