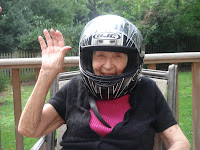 Once we explained what a Harley was, she was off and running!
Well, John and I both failed miserably in training Gert on the inhaler, but Bobbi (being a mother) made a breakthrough last night. Coman, Bobbi's son, used to have exercise induced asthma so she had to work with him to use an inhaler before he played sports. Bobbi even wrote down instructions for Mom which Mom dutifully took to bed with her so she'd have them in the morning. So, Mom's currently working on technique. I also bought her a saline solution spray which seems to have helped a bit and nasal strips which go across the nose to open the passages wider. So, we're on our way over here!

I was vacuuming the livingroom a while ago and saw her sitting in her chair with her inhaler in her hand. I turned off the vacuum and asked her what she was doing. She looked at me and said that she was waiting for the housekeeper to be done so that the nurse would come on duty. Cracked me up. Now I suppose she's waiting for the cook as it's lunchtime. There is no rest for the weary!
Posted by Unknown at 12:12 PM