How to catch a cat in the act

So, you know the tale tell sign that the cat is grooming - the lick, lick, lick, slurp, lick, with a few sighs of content thrown in. I came upon these sounds the other day while JB was in the kitchen. Now I've been fascinated by watching him groom previously; this cat gets into some acrobatic poses that would make the Cirque d'Soliel performers green.

So, the only thing I had handy to document the poses was my phone - good thing it has a camera. I was on picture 4 before he realized something was up. I just love these photos (if he had a middle finger, he would have used it in the last photo): 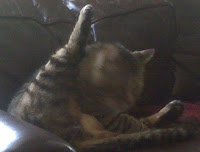 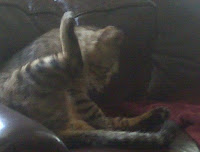 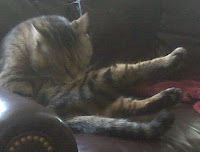 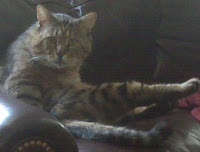