When Mom first came to live with me after Dad died, I panicked at any little thing that she reported as unusual. 'Your elbow hurts? Let me call the doctor.' 'Your knee. Doctor' 'Cardiologist app't today Mom. Yes, I know you feel fine but let's GO.' 'Of course we're going to the doctor - you just sneezed!'

So, she's been nursing an earache for the last 4 days and, since it was dragging on, I did make her go to the Dr yesterday. Nothing really unusual going on except a little fluid and probably a slight sinus infection. She got a very light antibiotic which was fine. The 'sweet oil' I've been heating in the microwave and shoving in her ear with a piece of cotton gauze (left over from Killian's sore foot - no cottonballs in the house....) seems to have actually helped.

Anyway, today, we both ended up in the livingroom at 4 am after having cups of coffee with John. She fell asleep in her chair, I'm on the sofa with a sore back (yes, I'm also aging...). She got up at 7 and walked to the bathroom. On the way back, she looked at me and told me her chest hurts. Now, in days of yore, I would have immediately hit the 'I've fallen and can't get up button', run around securing the dogs while simultaneously dressing myself and packing a hospital bag for her, all while waiting for the ambulance to deliver my precious charge to the local hospital and trained medical personnel. Today though, I looked at her and said 'Well, you're ok. You were sleeping crooked.' I propped her up with fresh pillows, straightened her butterfly clip in her hair (this is our version of 'dressing' her), and covered her and Matee with her blankee. 15 minutes later, I was proven correct. Chest pain is gone. I've survived 2 years of being a new mother. I guess I've graduated. Good thing as my 'baby' will be 93 tomorrow!

Now, I've got a sick cat too. Took poor JB to the vet yesterday as his cough has 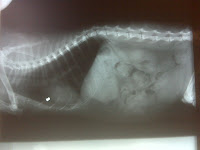 returned. Since he's got the feline AIDS virus, I'm particularly interested in keeping him healthy so he doesn't roll into full blown AIDS and a much shortened lifespan. The vet drew blood, put him on a twice a day antibiotic (note to self: don't mix up antibiotics!) and did xrays of his chest to see if anything else was going on. The vet and I were shocked and saddened to see a bullet in my cat's chest. The poor thing has been shot sometime in his past, and, the bastard shot him at close range. Luckily, the bullet lodged in soft tissue and didn't implode on a rib or a bone.

Now, this is about the most wonderful cat going (and, this is coming from a dog girl). He's totally trusting, loves his family as much as a cat can, accepts the dogs (mostly) and is quite the amazing creature. How he's managed to survive not only being homeless 5 years but being shot and, God knows what else, is beyond me. Even if he does roll into AIDS, something tells me this cat is a survivor. We'll do what we need to do to ensure his continued health and safety. 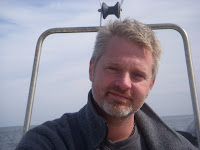 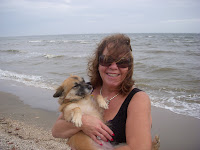 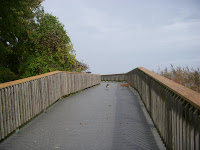 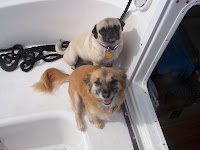 John and I spent Saturday on the boat in a pouring rainstorm which was fantastic. Loved it. We had Matee and Rita with us so took a rather damp walk over to Chesapeake Beach on a great boardwalk with the ladies, where Matee found a new best friend, a fox terrier with a tennis ball obsession!

Sunday, we powered over to Tilghman's Island which appears to be our normal path for brunch and then headed back. Gorgeous day on the bay although it was a bit rocky in the mid part. Still, any time on the bay is wondrous.
Posted by Unknown at 7:18 AM