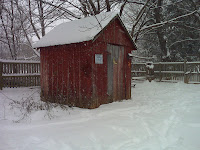 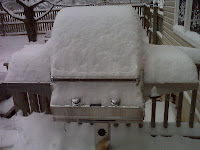 Well, we've been hit! We've got about 11" right now of a nice, fluffy snow, with a projection of another foot coming! PERFECT as I just adore snow storms. Of course, I don't OWN a pair of snow boots (d'oh!) and had to shovel in small boots that barely covered my ankles. But, I had to get a path made in the hopes that Rita would use it (no go, so far). The snow is up over her back - there's some major disadvantages to being short...So, Mom and I are watching her like hawks - well, as I type, there's a question of who is watching who as Mom is sound asleep underneath the heated throw John gave her for Channukah (GREAT present, BTW) and Rita is sound asleep in her spot on top. She and Matee fight for the prime spot of Mom's lap. 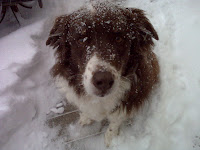 Channukah was quiet around here with a nice dinner, complete with potato pancakes which, honestly, weren't my best. But, John and Mom are easily impressed so they liked them (or, perhaps they were too chicken to let on that the pancakes sucked..)

John gave me a great present for my holiday - he had a walkway built around the hot tub so we don't track in mud, and dirt every time we climb in for a soak. Ben, my handyman extraordinaire, put the thing in yesterday; just in time for it to be buried under snow! But, it came out very nicely and we're all pleased with the results.

John and I had a fabulous cruise over Thanksgiving which I'll detail in another post as there's some great pictures to share. Sharyn took a full week off work and came up to stay with Mom - thereby allowing me to really relax on vacation as I knew Mom would be fine under Sharyn's watchful eye. And, she was. 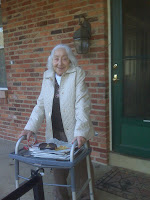 I managed to get Mom out last week for some minor shopping. Since it's cold outside, I try to bring the entertainment inside with having frequent visits from whomever I can scare up. Most nights, it's Mom, John, Bobbi and me but, since we find each other pretty amusing, the mix works! 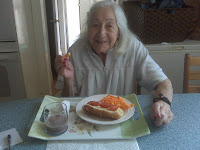