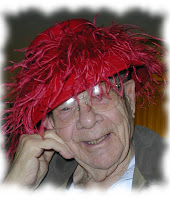 So, spent a while this morning trying to dig up the term where an incorrect word is used as a substitute for the correct word - such as 'Cinderella' vs 'Citronella.' I always thought is was a spoonerism, and, after much searching, have determined this particular issue is called a malapropism. And, it's hereditary. Here's some of mine:

And a host of others. Those who know me well can hear these almost daily when I'm in my car, singing a song. I'm famous for it. I get that from my Daddy. Comforting to know the pear doesn't fall far from the bush.
Posted by Unknown at 6:17 AM