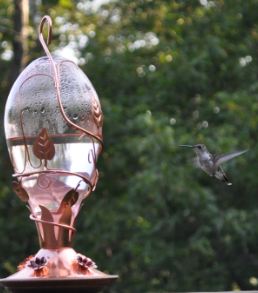 As I go about updating the blog, I was looking through pictures to trigger my memory of what we've done this summer. Turns out, we were sort of movers and shakers this summer - well, John and I were at least. Gert was more of a sitter. But, had a beautiful summer with many weekends spent on sailing or on the jet ski and a few very nice weekends at the cabin. 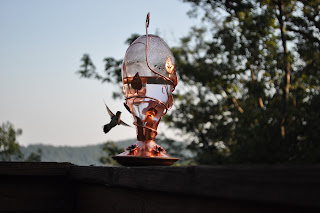 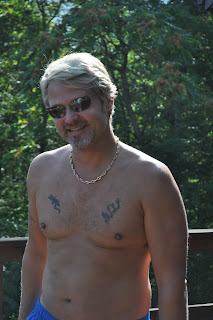 These shots were was taken off the cabin deck with my new Nikon D5000 camera and the zoom lens. The bird was about 8 feet or so from me and gorgeous. She was trying to get to the feeder but was scared of me at first. Once I put the camera up though, she posed to and fro, swooping, chirping, flying backwards. Got a few nice shots.
We took a few chairs and a cooler down to the river and joined the rest of the locals in the water for a few hours. Even fell asleep reclined in the water. A wonderful day.

We specifically left all the dogs at home so John and I could come and go as we chose. Or so we thought. But, then a stray Fido showed up about dinner time (imagine that) and we put out some kibble even though he was well groomed, clean, and knew basic commands. He took off after being sated and supposedly went home for the night. Turns out he was the neighbor's dog but knew a good thing when he saw it.

Spent two nice nights on our own until we returned to normal life where Gert awaited.


So, I've found a few new writing sites on the internet, the newest of which shows some promise. It's ListMyFive and is a load of fun to write for. You just come up with lists of five items - doesn't matter what they are. Below are a few of my current lists: