A story about a tootsie roll...

Ok, I've found a new internet site on which to get residual earnings on writing, ListMyFive.com. My best ever internet friends, Peggy and Joan, are also not-so-willing participants at the site. I say not-so-willing as, collectively, we earn, oh, maybe 3 cents a day on articles. Yes, you read that right....3 cents a day COLLECTIVELY. Now, I appear to be ahead of the curve, having earned almost $3.75 this month alone (no, it's not going to carry me into my twilight years in Key West, but, dammit...it's a start). Anyway, I was lamenting with my pals about what I could do with my big ONE CENT earning today. I asked Peggy and Joan if there was even penny candy made these days.

Joan replied that they make a teeny weeny itsy bitsy tootsie roll - a mini, mini sized Tootsie roll which is sold at her local drug store. Somewhere back in the archives of my mind, I got to thinking about a Gert story...


When Mom was about 75 or so, Mom and Dad were driving from Phoenix to Las Vegas, a trip of around 5 hours. They were about half way there, and approaching a very small town called Nothing, Arizona, population 2 - Google today reports that the population of Nothing, Arizona is now 4 so someone was busy...

So, they went into the one and only store in Nothing, Arizona. Mom says it had one gas pump and a small store that sold pepsis, cokes, and potato chips and candy (the important part to the story is the 'candy' part).

Mom at that time wanted a candy and picked out a tootsie roll. You know the kind; they looked like something that was coming out of the body instead of going in...So, Dad got Mom a tootsie roll that she reports was older than she was. She went to bite down on it and her mouth was not round any longer; it was square. She had broken her jaw on a tootsie roll! Big bummer. Mom had to have her jaw wired, which I don't recall Dad complaining about, for a month or so. I'm not sure she ever got over that tootsie roll. That tootsie roll cost her $1500 she says. And, as she says at this very moment, "I don't like tootsie rolls anymore." 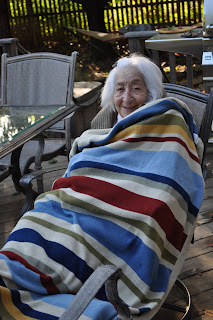 So, as her 94th birthday rapidly approaches, we at least know what NOT to get her!
Posted by Unknown at 6:45 PM