My quest to cook a low salt diet... 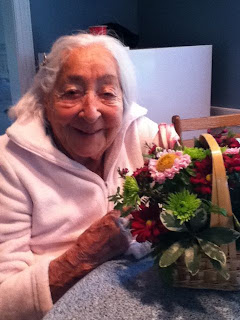 So, after our brief stint to the ER last week where Mom was diagnosed with CHF (heart failure - don't panic; almost every elderly person has heart failure. It only means that her heart is working harder to keep her body going). Anyway, we did a follow up appointment at the Cardiologist a few days later and I was told to limit her sodium to 1800mg a day. Now, I can cook my butt off but cooking without salt? WTH? I never was heavy with the salt shaker but now I had to put the thing away!

So, after a few late night on the internet (what a great invention), I was armed with a grocery list. Exactly 1.45 hours later, I had gathered the supplies needed to make a few starter meals. I, however, was exhausted from reading every label I picked up and deciphering sodium content and hidden salts. But, I felt that I at least had a start so was not feeling quite as overwhelmed.

Here's a few articles I've posted online about my new challenge:
Cooking a low sodium diet for the elderly
Reduce sodium in the diet with the use of herbs

So, as you can probably see, I'm getting quite an education in the low sodium field! And, let me tell ya - it was a bit confusing at first!

Dinner last night was a delicious Country Chicken recipe that John found on the Mayo clinic website. They have some of the best low sodium recipes around. John hated it but Mom and I both thought it was pretty good - remember though, Mom and I never really ate that much salt whereas John sleeps with a shaker under his pillow (no, not really

John's off to Boston for the whole next week but I have Carina back and Lori is available to fill in as needed. So, I'm covered which is a good thing as that last stint of 14 days alone was pretty draining. I plan on doing a lot of cooking, vacuum seal and freezing meals for Mom.

I've also noticed a direct correlation between Mom's periodic confusion and the lack of water intake. So, I've been on her about drinking water. I think she's finally seen the error of her ways too and is easily doing as I suggest. The easiest way I've found to measure her water is to put it out in a jug in the morning. The cardiologist told her that she had to have 8 full glasses by 2 pm so that's our goal. I think the next move will be an alarm clock in the livingroom set for every hour where she has to drink half a glass. I'm sort of hoping we don't have to go there as I think Carina and I can stay on her.

Also, to Joni and Mark (who just received a new kidney last night): Mom and I are thinking of you guys. Love you.
Posted by Unknown at 8:35 AM