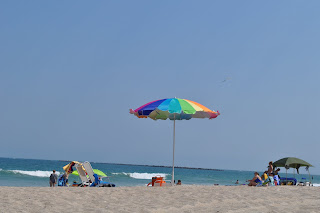 Well, I did it! I ran away last Friday and drove to Wilmington, NC to visit Sharyn for four full days! What a great time was had by all.

The visit was a mix of family and friends (and friend's family...). Big brother Mike was in Florida with his daughter Jennifer so he decided to do a road trip and, 12 hours later, he was at Sharyn's. She happened not to be home when he arrived, so I told him to go into the house and hit the bar - which he did.

Sharyn's sister, Mary, whom I adore, was in town visiting her daughter (Mary) and her family. So, we had a huge, impromptu reunion of sorts. Mary came over Friday evening where we tottled off (with friend Phil who was also in town) to Big Daddy's - a beach bar where Mary's daughter (and my mom's caregiver for this past summer) Kelly worked. Let's just say that we descended in, apparently, droves and had a blast. We gave Kelly a run for her money behind the bar before waddling off to another bar to listen to some music and do what only we could consider 'dancing.' I remember a lot of swaying, but I'm not sure it was intentional....Mary ended up spending the night at Sharyn's - smart move.

Saturday morning found us all walking around the downtown Cape Fear area, perusing the stalls at the local farmer's market - one of the nicest ones I've ever seen. Bought a jar of peanuts steeped in hot pepper juice. There happened to be a hot pepper in there and, I'm not exactly sure whose idea it was but let's just say my mouth was in flames for a good 10 minutes. I tried to express to anyone who would listen to me babble that I wanted my tongue cut out. No takers. Won't do THAT again though...

Saturday night, Sharyn and Mike went over to Kathryn's house for a crab dinner while I stayed behind and wallowed in my own company. It's so very rare that I'm totally alone these days. I know there will come a day when I wish I wasn't alone but, for now, a rare break is so very good for my soul.

Sunday at 3:30 am found brother Mike hitting the road back to Florida. That's a guy who will drive a LONG way for a party! He was only in Wilmington two days - sheesh. I've been ditched by better... 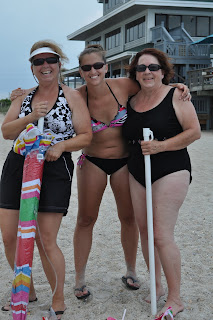 So, Sunday, Sharyn and I loaded up the car with every modern convenience needed for a trip to the beach and set up shop right on the shore. Mary and Kathryn came to meet us and that's where the wrong turn happened. We'll just leave it at this - I've been thrown out of better places than the Oceanic pier. It could have been Sharyn giving me the finger for this picture, or perhaps it was Kathryn knocking over a full margarita, or maybe it was Mary being, well Mary (did you note, dear readers, that I was excluded from being a troublemaker? That's because I was the angel of the group, and tried my hardest to keep the other three under control. Alas, to no avail. We were cut off. Sucked.


Sunday night found Kelly coming over to Sharyn's house to visit. We sent her off to bring back food from Indochine (a fabulous Thai restaurant in Wilmington) and we settled in for some sofa sitting. When Kelly was 2, she climbed atop my convertible celica and had her picture taken - as I recall, she demanded that we take the picture. So, we put her back on a convertible (the mercedes this time) 19 years later and took some pics. 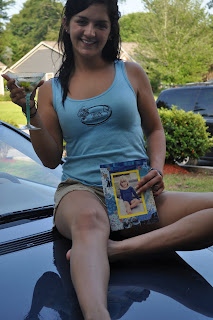 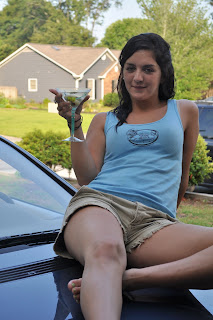 Monday morning found me and Gizmo winding our way back home. Great top down weather and some wonderful memories from the weekend. It's so good to have great friends.