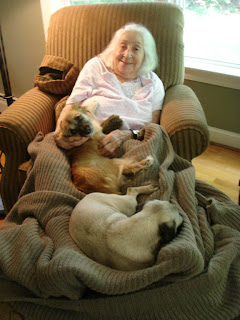 So, I bought Mom a lottery ticket for the week. She's been seeing 'Baby Row' (translates to 1, 2, 3 for you non-gamblers). Anyway, she's been seeing the numbers all around on license plates, on bill boards, etc. So, I put a crow bar in my wallet and shell out $7 for a weekly ticket. I came home and gave it to her with a 'good luck' and got on the internet to research when it hit last.

So, I look at her and said:
Great. It's last hit here in Maryland April 4, 2004.
She looks at me and, quick as a whip, she said:
Hey, great! It's due!
I think that's the secret to her aging so gracefully. The glass is always half full to her. 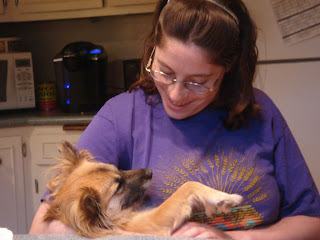 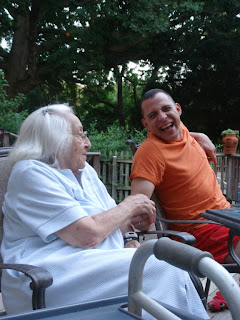 Jennifer's trip here was nice. Rita is a bit shy with new people but she was willingly approaching Jen toward the end of the trip. Jen's dog allergies kicked in though. This is NOT the place to be if you're allergic to dogs! Had some nice dinners on the deck though with friends, and Jen and I did some minor shopping - got new quilts for Mom's bed and mine too. Mostly just hung around the house though.

Took her shopping this past week to look for, well, ladies undergarments. She had the staff in stitches. It sure was a lot of work, though, for all involved - and, it took 3 of us! Hope we don't have to do that again anytime soon.

John's off for 6 days to San Francisco (lucky stiff) and Bobbi is in Las Vegas celebrating her birthday until Saturday so Gert and I are pretty much on our own here in the near future. We tend to get into trouble this way so we'll try to behave. Have a bunch of friends coming over for barbeque dinner on Saturday night so that should be fun.
Posted by Unknown at 7:27 AM