I've heard of tying a red ribbon on a doorknob... 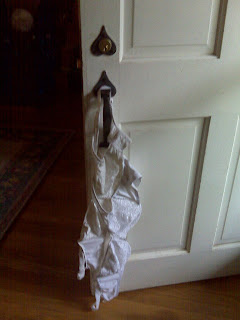 But, never heard of 2 hanging bras! Came home yesterday to the sight in the picture at left. Laughed out loud as I put my key in the door. Mom was sitting in the livingroom, laughing right back. She said that she'd hoped the mailman would have seen them (and come in!) before I got home. Funny little thing.

I went to Bonefish with Jeff and Amanda for cocktails and found Eli (the manager) there. So, he made Mom the crabcakes like she likes them and, after a few martinis, I toted them home for her dinner. Delicious. I had the ahi tuna which, if you like sushi, is the best in DC. Sure beats the tuna martini at Clyde's lodge which used to be my favorite.

While I was at Bonefish, Mom called and reported that Matee was having slight problems breezing. This phenomenon is not particularly unusual for a dog blessed with almost no nose. I told Mom how to hold her to aid in the cease fire of lung retractions which she did. Matee calmed down and all was well. 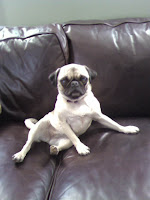 Mom called back in 5 minutes to report that Matee's eyes were bugged out as large as normal but her eyes (Mom's) were about 10 times their normal size. I again emphasized that breathing issues are not just for the elderly anymore and Matee was fine. Mom said that she realized that but 'nothing is going to happen to this dog on my watch.' I knew I'd left the dogs in good hands - all 5 of them.
Matee gets in bed with Mom each morning that the dog is here. She curls up against Mom's legs - she likes her sleep every bit as much as Gert does. They generally tottle down the steps around 9 am, together, as always. Matee and Gert are in total awe of each other. I think they're soulmates. Rita fills in when Matee is gone so all is well at the Mansion East.
John is in California until Tuesday but was kind enough to leave behind some home roasted coffee he's been experimenting with. I love this stuff so much that I'm about to enter into the home roasting arena myself with my first order of beans from Sweet Maria's website. I have to limit myself to two cups though as it's much more potent than pre-roasted beans. I doubt I'll be at Starbuck's nearly as much as I have in the past as this stuff makes Starbuck's coffee seem like water. Amazing coffee.
Ended up the evening by sitting around the deck with Jeff and Gert shooting the breeze for a while. Have a doctor appointment (tune up) for Gert today and taking her shopping for a bit after. Nice to get her out on a gorgeous day.
Below is one of my favorite pictures of Killian. Cracks me up. Don't tell PETA... 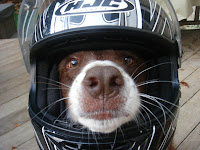