Well, seems like blogging is a commitment and, with all my other commitments, well, you can see where my priorities lie. All is well though at the Mansion East, and Gert is pink as can be. She's doing quite well. although the summer has flown by with hardly any excursions. But, with all the friends surrounding us, we've had a pretty good time just sitting at the Mansion.

Sophia has been filling in for me most Saturdays as it's sort of the best sailing weather ever so John and I have taken the opportunity to hit the marina on Saturdays. So, John and I try to sail, Mom has the side benefit of getting excellent chinese food, weekly (one of the reason Mom's clothes no longer fit....that, and, well, oatmeal cookies). John and I tried to sail a few weekends ago with Lorne and Victoria but the weather gods were against us. We got to the marina early to prep the boat only to find not an inch of wind blowning. This actually worked to Vic's benefit as, at 8:45 she finally called (they were to be at the boat at 9......typical Victoria...sheesh.). Anyway, she called to report that they were just getting up - late night with friends, nephews, et al. After hemming and hawing, John and I decided to crash at their place as Lorne's power boat was back in the water and, wind or no wind, that thing was going out! So, we drove down to Lusby to board the IrROCKtional and off we went. Boy, did we GO! I spent most of the day falling on my butt as I refused to believe that one had to hold on to go over a wake at breakneck speed. Took a very nice unintentional dive while trying to get back on the boat once - the crew held up 5.0 but I think it was closer to a 9.7.

We ended up going to a 'beach area' which, well, was a 'river area' as the tide was in so sand was not available. But, ended up sitting, floating, and chatting most of the day away anyhow. We're nothing if not flexible! After we tired of sitting, floating and chatting, we took the boat over to the Tiki Bar where we proceeded to, well, sit and chat. Had a great time. Pictures will be forthcoming as they're in the camera still (a problem with digital cameras...). 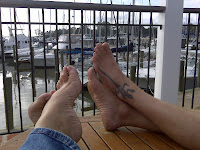 Last weekend, John and I tried to sail but ended up sitting on the boat, at the bar, listening to music. Had a great time as can be witnessed by the picture at the left. John and I sort of specialize in these types of shots. Sailing or not, it was a totally glorious day. 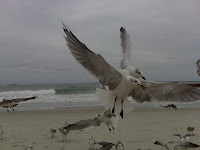 So, today finds me down in Wilmington, NC, visiting Sharyn while John remains home with Gert and 5 dogs (did I mention that I have the best boyfriend ever?). Sharyn and I did a fair amount of beach sitting yesterday, which is the same game plan for today. Since the beach was deserted except for a few folks, we decided to feed the gull. Luckily, neither Sharyn nor I require much entertainment....The shot to the left is proof that they really do get pretty aggressive!