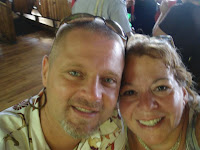 Well, it seems like time just flies around here! Since my last update, I've returned from a fantastic (that's 'f'ntastic' to you, Bobbi and Nancie!)cruise from Ft. Lauderdale. John and I boarded the Enchantment of the Seas for a 4 day cruise which was supposed to go to Key West, Cozumel and then back. Due to the hurricane though, we got diverted to Nassau instead of Cozumel. So, August 29th found us in the same town in which I rang in my 50th with dear Bobbi just 2 short months ago. Not a problem though as John and I made our own fun. Did the requisite jewelry store shopping (visited a gorgeous necklace that I'd fallen in love with in June. Luckily, I fell more in love with its case-mate, an emerald/diamond number which was just too expensive...), cocktail sipping and, this time around, we found a great beach where we stripped down and hopped in for about a 4 hour float. A great time was had. 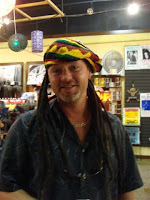 Key West was also a blast as I started the day off right by taking John to one of my favorite spots - breakfast at a local off-the-beaten-path spot - Pepe's. Bloody Marys ensued, a gorgeous omelet and the best homefries this side of Cuba. Walked around and acclimated John to my 'other' hometown. Walked around the Marina and drooled at the pleasure boats, drinks at Sloppy Joe's, shopping at Fast Buck Freddy's, drinks at Hog's Breath, drinks at....well, you get the idea. Waddled back to the ship in time for sailing (quite a feat after a day of Key West). Interestingly, we'll be back there for fantasy fest in October. That's Rasta John on the left.

Came home and 'relaxed' back into the homestead with loads of clothes and major vacuuming. Not sure what happened but the dogs must have exploaded as the floors were just coated in fur! Of course, that happens around here anyway. Which brings me to the 'Furbicator.' For those of you dog owners, this thing is worth the very hefty price tag. It strips the undercoat quite easily. Killian is about 10 lbs thinner! Amazing invention. 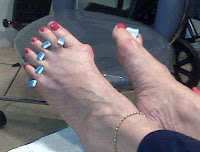 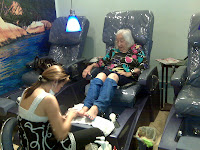 Gert's doing quite well. Did mani/pedicures last week and was quite jealous that her nail color is much better than mine. Amazing how many people mention how gorgeous her nails are when we go out.

Mom and I went out yesterday to buy a woodstove to try and stave off the huge increase in oil costs we suffered last year - heating bill quadrupled - ouch! Did lunch with John at a vietnamese pho restaurant where the utensils proved to be quite a challenge with a 91 year old. Those goofy spoons just don't work too well in arthritic hands. But, she managed to still proclaim the meal 'delicious' and it was. It's amazing to me though how much I learn daily from her - she's really got a truly positive outlook about everything. Situations are not 'challenges,' they're just something to deal with. And, we end up getting very creative sometimes.

Sophia has been over the last 3 nights, making fantastic dinners. I've repaid the debt by doing baking so she's good on fresh bread, oatmeal cookies, banana bread (yesterday) and marble pound cake (today). It's a damn good thing that I don't like this stuff! Mom's certainly appreciative and she's showing it. Bought her some stuff in her normal size which was too small - she thought the stuff shrank until I gently noted that the stuff was brand new and maybe she was expanding....funny.

John and I were going to take Mom down to Saint Michael's this weekend to go on a 2 hour sailboat ride on a charter but got concerned about the long commute and wearing her down. With the Bay Bridge damaged, it will take at least 2 hours to get there, then a 2 hour sail and 2 hours back = 6 hours or an exhausted Gert. So, that's out. We'll find something else to do with her. John and Mom have a mutual admiration society - of course, part of Mom's fascination with John is that John is the owner of Mom's dog...Matee.
Posted by Unknown at 8:03 AM