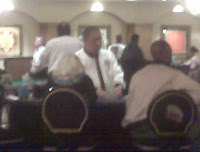 That fuzzy little old lady there on the left is my momma in a undercover photo at the Hilton Casino in Atlantic City. Since it's illegal to take pics inside a casino, it was the best I could do - she sure looks purdy from behind though.

So, last weekend found Mom, me, Marlon (her date) and Craig (my date) in Atlantic City for some gambling fun. Had a total blast! Mom actually came out pretty good, only having lost a small amount of money. I, however, did not fare as well. Mom had expressed some concern about her playing skills, having not handled a blackjack hand in about a year. She shouldn't have worried - she was da bomb. She played much better than about anyone around her - splitting, doubling down as appropriate. I was comfortable after a bit leaving her on her own although I did need to keep her in my sight (last time we went to AC, the security guard took her to her room.....long story on this blog in another post somewhere...).

The first night found all 4 of us, after a fabulous dinner, around the same blackjack table on a very nice roll - we were really taking the dealer. Should have known it wouldn't last. We had many many laughs that night. The next day was as amusing, if not as rewarding. While Mom took a nap, Marlon, Craig and I hit the Trop for some craps - and, it as pure crap. Ugh. We were still laughing pretty good though - even losing is fun with those guys.

We took every occasion to prop Mom up at the craps table while Marlon, Craig and I partook in our passion - rolling the dice. Mom never was a craps girl; that was much more Dad's gig. I learned from the best. And, he was there with me quite a few times when he told me to 'goose up that 9 to $25.' I did as he instructed and mostly won that bet. Mom was the keeper of my cash so I actually came out ahead, as she was under strict instructions to NOT give me the pretty green or black chips. After one very nice roll where I held the dice 20 minutes or so, I was up $400. I heard him say 'That was nice but if I was betting....' He always said that after a nice roll, insinuating that he could have really made retirement money - used to piss mom off at the blackjack table. I just laughed at him.

So, all in all, it was a quite successful weekend. We had a very nice time and can't wait to go back. I'm thinking a respite in December sounds about right....better start saving. 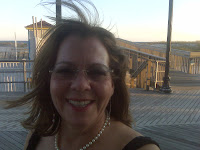 Oh, the pic to the left is proof that I actually got outside for a bit! Gorgeous day!
Posted by Unknown at 7:24 PM