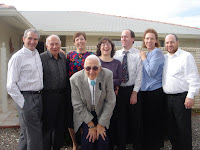 We got sad news a few days ago; Mom's 'baby' brother, my dear Uncle Al, died Saturday at 91 years of age - he's the one in the front in the picture to the left (I think he thought he was taller than he was....).

My favorite Uncle had fallen a few days prior and was in hospice when he just slipped away. Although the death of an elder is, in a sad way, not unexpected, it's never easy. We were very saddened over here, but still managed to raise a glass of sherry in his honor. BFF Bobbi came over to lighten the mood which was a nice relief. It's sometimes difficult to prop Gert up, even though she is very resilient and very wonderful.

Note: that very handsome man to the left in the photo was my gorgeous cousin, Jay - Uncle Al's son who passed away a few years ago from cancer. Jay and I were co-conspirators in crashing the Presidential Summit held in Philly when Bush was in office. But, that's a story for another time.

There were 5 children in Mom's family; Aunt Rose, Aunt Ruby, Uncle Herman, Mom, and Uncle Al. Four of these children lived into their 80's which, if you think about it, is amazing considering they were all born in the early 1900s. And, quite thankfully, Gert is doing quite well over here and about to be 93 on the 28th of October.

When I was growing up, we took yearly trips back to St. Joe, MO to visit my mom's parents (my Bubie and Zadie) and the rest of her family. I remember so well the stories her brothers and sisters would share with us about the antics that Mom and Uncle Al got into as children - like oiling Zadie's wallpapering board (his livelihood) so that they could slide down it and amuse themselves. Or the time Uncle Al ducked when a rival threw a brick at him and the brick took out a plate glass window at the pharmacy - only time in history a kid's been beaten for ducking!

And, of course, we, the next generation of Burdoo children, in a way, owe Uncle Al our lives. It was Uncle Al who knew Dad from their fraternity at school. Uncle Al invited my Dad on a hayride to be a date for his sister (enter my Mom) ‘with the good personality’. Of course, Dad's first question was 'is she cute?' Uncle Al's reply was honest and to the point: 'Hell no she's not cute but you'll have a great time with her.' And, they did, for 65.5 years.

On my folk's 25th anniversary, they went to Hawaii, with a brief layover in California. Now, Uncle Al and his wife (Aunt Lois) had move to LA right after my folks had married. Uncle Al and my folks were living on separate coasts of the US. Back in the day, air travel was not as easy to come by as it is today and, with both siblings raising families, they didn't see each other for 25 years. So, as the story goes, Mom and Dad stopped in for a quick visit to LA. As Uncle Al met them at the airport, he clapped Dad on the back and said 'You sure hold a hell of a grudge.' That pretty much sums up my Uncle's humor.

And, of course, there were all the wonderful times I spent with him in Arizona every year when I went to visit the folks. I'd always pick him up and take him out for marguerita's at Arriba's (our favorite spot) and sit and laugh the afternoon away. He and Mom shared the same sense of humor - he never failed to get me laughing, and laughing hard.

He and Aunt Lois happened to have the only bathtub, it appeared, in the entire city of Sun City, AZ. So, each year, I'd drop in with my bathrobe in tow to soak in the tub - showers are ok but there's nothing like a bath for relaxation. One time, I brought along some cookies I'd made and the three of us laid in their bed eating cookies, drinking milk and laughing. He never failed to remind me of that time. He also never failed to send off a card for a family birthday or anniversary - it was always magical when a card appeared on the exact special day.

When Uncle Al retired, he became quite the artist - wood was his first media, then there was stones - all kinds of jewelry came my way. I'm the recipient of miles of beautiful beads and earrings.

And, really, who can forget the mini-basset head bashers he made (well, that's what I used them for). Uncle Al, in later years, became quite the woodworker and made these things (said basset head basher) which were actually thoughtful tools designed to push items safely into a garbage disposal. Well, the theory was nice but, since my house is from 1857, I don't have such luxuries as a garbage disposal (or air conditioning, for that matter!). And, who can forget the toaster tongs (by the dozens) he sent over? I do have some very nice handmade bowls and spoons and a few gorgeous stained glass lamps - he gave that up when he tired of running to the drugstore for bandaids. Figures; that was one craft I really loved. I have a few very beautiful stained glass windows he made which I enjoy daily. And, he's the one we have to thank for the profusion of stone clocks we've all grown to love - I mean PROFUSION....

So, then there was one. Mom is the lone child left from her generation and I'm so glad she's here with me. So very glad. I tell her daily how lucky I am to have her with me.

I took Mom out this weekend for a little car ride. I decided to wander a few backroads and take her across the ford on our road to the 'other side of the woods'. We ended up wandering up toward Sugar Loaf, our only mountain which is, oh 700 feet tall. On the way though, we found ourselves wandering past a local winery where, of course, we just had to stop, get a few glasses of wine, olive and cheese platter. I'm always amazed at the amount of people who smile, wave, and talk to Mom (I'm invisible). It's just adorable to watch - especially the teenage boys who totally let down their guard with her.

So, on the way back, I took us on a tour of a nice cemetery up there - there's a Judaic gardens that I've always been curious about but never been in. It's gorgeous - as far as cemeteries go - very serene, birdbaths hold the memorial stones that we drop on headstones when we visit. It's a fairly new cemetery and very well cared for - much more like a park than a cemetery. We rounded the road to a particularly beautiful corner with a family plot tucked away down a small secluded meadow, surrounded on all side by oak trees with changing leaves. I mentioned that, if you had to go, that's not a bad place to spend eternity. Mom looks at me and says 'I prefer not to go.' Good enough.
Posted by Unknown at 9:19 PM