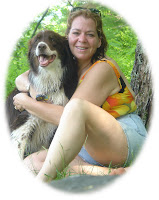 Well, we've been fairly busy over here. Last night found me choking a redheaded dog who ate one of Mom's heart pills which hit the floor accidentally. While I grabbed him and fled outside to choke the pill out (no go; his gag reflex is as strong as mine is - I almost threw up though...). Anyway...

I called the animal hospital who gave me the number for poison control for animals. I was dialing and yelled for John to call human poison control at the same time as I was on HOLD (5 minutes worth of hold, btw). John got his poison control on the first ring. Nice to know they're so responsive on the human side.

End result is that a 62 lb dog downing a Micardis 80 mg is not a big deal although he slept more soundly than normal and scared me a few times throughout the night when I tried to wake him to check on him. He, at least, had a nice night.

Oh, and the human poison control called back today to check on him so they could update their database....I thought that was a great touch. I called the animal hospital and told them my tale. They were aghast, as was I. Ridiculous episode.

So, we have a new 'pill pusher' in the house. I'm onto his antics this time though - he's banished to the other room while Mom eats from this day forward.
Posted by Unknown at 9:06 PM