American Idol is upon us again. 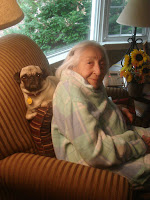 So, it's cold out and Mom's been pretty much housebound lately, watching a lot of tv - she spends a lot of time on the 'Who's your daddy shows,' as she refers to the 'Judge shows'. We watch a lot of the food network too and actually try a few recipes here and there. All in all, a slow winter is being had by all. But, that's not necessarily a bad thing. Could be way worse.

So, we're both amused and chagrined to find that American Idol is starting again - We're not going to spend another season watching this show, are we', we ask each other?

So, we dialed it up. We talked about how Dad was sitting right here with us, rolling his eyes and asking:

'We're not going to spend another season watching this show, are we?' And he knew the answer too.

So, here we sit, watching the beginning auditions, most of which are truly horrible. But, the time spent has paid off in a few Gertisms:

1. A pretty horrible girl was warbling an equally horrible song. Mom looks at me and says 'How much is bus fare in Boston?' 'Why,' I ask (already knowing the answer). She looks at me innocently and says 'Because they need to send that girl back.'

Then, we were talking about Bobbi, John's and my local haunt, La Mex and some of the patrons there. There's one particular man, we'll call him Bobblehead, that just showers you with spittle when he gets tipsy. I came in the other night, freshly spittled, and lamented the fact to Mom. She looks at me and says:

'Now, Lori. You KNOW you need an umbrella when you're talking to Jimmy!'

Cracked me up. That woman is not right.
Posted by Unknown at 8:43 PM