He said to me 'WTF! I was only getting gas!'

On day 3 of our Bay vacation, John decided to take the jet ski over to Tilghman Island, ostensibly, to gas it up. Of course, the Rod And Reel Marina was a short jet ski 5 minutes away and has gas pumps aplenty but John must have conveniently forgotten about that or, perhaps, he just wanted to battle the bay for the 12 miles to Tilghman. Wouldn't have been a problem if, well, he didn't need to stop for gas.

So, on the way across the bay, John reports that the waves were 2-3 feet with wild swells. He was having a blast, jumping from one top to another, catching air and loving life. Having been a pro at riding (and wiping out) on dirt bikes during his youth, riding the jet ski brought back some of his skills (or lack thereof) from days of yore. The guy also has a cat's 9 lives and generally lands on his feet (most times). Anyway, he said he had a wonderful time on the ride over and back and came home, safe and sound. But, something was amiss. I wasn't sure what it was but something was rotten in Denmark.

Let me set the scene:

Lori (lying in bed, reading a book, relaxing)
John  (enters room and flops on bed. Lori gets slightly wet from the impact and wonders why he's so wet)
Lori (looks at John and detects that 'I ate a canary look' - believe she saw 3 yellow feathers sticking to his beard).
Lori: 'Hi, honey.' 'How was your ride?'
John: 'Oh, it was GREAT, waves were 2-3 feet in the middle, got to Tilghman in 30 minutes. It was a great time.'
Lori (recognizes a pregnant pause when she hears one but stays quiet and allows the pregnancy to bloom. Finally, she's waited long enough and peers at John quizzically)
John: 'Well, there's something I need to tell you but I don't want to...'
Lori (glances quickly outside and sees the jet ski on the lift. No crunches or untoward effects from this latest ride seen. Glances back at John to do a quick appraisal - bruise on foot, same as this morning. Broken toe, same as this morning. Assorted bumps and bruises on arms, same as this morning. Bruise on ego? New...)

And, so the tale starts:


John did, indeed, make it to Tilghman after playing in the bay, hopping too and fro. He was tied up to the gas pump at Tilghman ready to hop onto the dock and gas up when a fairly large boat went by (remember; this is John's tale - it could have been a duck for all I know.).

Anyway, he reports that this h-u-g-e ship went by (in the no wake zone, by the way - no wake means there's no waves allowed. 6 knots is the maximum speed. A wave created from a boat going 6 knots is about the same as a child jumping in a swimming pool - and not off the high dive. It's more like stepping off of the last step in the shallow end....).

Anyway, the next thing he knew, he was in the drink! Boop! Gone. Right over the side of the ski while TIED TO THE DOCK. Now, in my book, this one beats my dump into the harbor or even Bobbi's less than ceremonious slide at Herrington Harbor South - after all he was TIED TO THE DOCK. The slight no wake wiggle of water was enough to send that cat a sailing.

I was just holding my sides when I managed to choke out 'Did anybody see?' 'No' was the too quick answer and might have slid by a less astute listener but after a slight second, I decided I just couldn't let this go! 'Wait a minute!' I choked out - 'What about the people on the boat? They must have seen.'

With a harumph and a hurt look in those baby blues he said 'Well, I didn't see the people so it doesn't count...'

And, in fine fashion, after I stopped laughing, I documented the tale in a picture as, we all know, dear readers, a picture is worth a thousand words (I'm thinking I should become an artist instead of an author..): 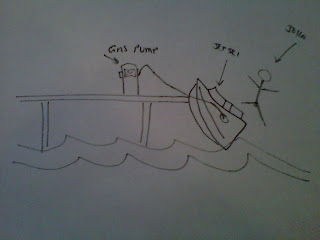 Kim came down for the day to visit and we had a nice time with some cocktails on the deck. John decided to go for a jet ski ride and asked Bobbi if she wanted to go (now, when my friend Bobbi lost her mind is beyond me). She was still quite sore from our crash 2 days prior. I couldn't believe she's set sail on the jet ski again after our spill of Titanic proportions. But, cocktails make one do strange things.. So, off they bobbled.

The bay wasn't particularly stormy - probably 1 to 2 foot waves. Nothing to worry about though and, we now know that the jet ski was gassed up so we're safe on that front. John and Bobbi should, theoretically, have come back as dry as when I sent them off. But, ah, that's what the tale's about.

John dropped her off the back of the jet ski, not once, but twice! The first time, they hit a wake of a boat - nothing like Ron's boat but enough to send Bobbi back off the left side of the ski again. The second time, she was smart and hung on so tightly to John that she pulled him off with her - smart move. It's best to teach a lesson early on - I go in, you go in.

On the second spill, they said they kind of slid gracefully off the ski which is still a bonus from our previous crashes. And, Bobbi said, this time, unlike the other dives in the drink, she went off the right side of the ski. She said she liked the left side better.