Morning was nice as Mom and I shared a cup of coffee and 'caught up' on exactly nothing at the breakfast table. I forewarned her that a shower and hair wash were in her very near future - she just resists both as the tasks are exhausting for her. Now it's not exactly my choice of how to spend an hour either but it does end up being pretty funny sometimes. We do tend to crack up as I dry her hair into all kinds of different shapes - sometimes, a girl needs a new 'do.' So, around 10 am I told her to go ahead upstairs and get ready because here I come and then the phone rang. 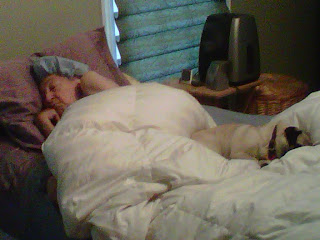 I was downstairs talking to Kim for quite a while for me, probably about 20 minutes or so before I finally climbed the steps to start in on the grooming. She was the cutest thing - she'd fallen asleep on her bed, still clothed in nightgown but donning a sporty shower cap. Now, the shower cap was a diversion as I know she was thinking that if she had one on, maybe I wouldn't wash her hair. No go. But, she was too cute to wake up. She and Matee were just curled up together and I left them snoozing another half hour or so before starting the festivities.

So, shower done and white hair gleaming, we headed out to a fancy grocery store here, Harris Teeter, that had opened in a new location. Inquiring minds want to know. Plus, we had nothing better to do with the day and one can only watch so much Judge Judy.

Off we went down 270. Her memory was particular sharp this morning as we talked of olden times at the beach house on Kent Island and other choice memories. 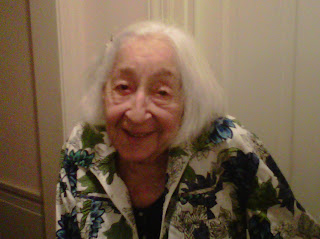 We got to Harris Teeter and picked up some lunch - first things first. As we sat at their little lunch room area, it triggered a memory for Gert and she told me an interesting story.

Around 1930 somewhere, Mom's brother Uncle Al married Aunt Lois and moved from St Joe, Mo to the big city of Kansas City, Mo. Uncle Al and Mom were only 16 months apart and were inseparable as they grew up. So, he called from Kansas City and suggested that she move there to find work and live with them while there (she slept on the sofa) until she got the money to get her own place. Mom wasn't there very long before she found work at the New York Bakery and moved onto their sofa.

But, the move was short lived as Mom was only there about a week when she came home one night after work and Uncle Al said 'you're going to have to find a place to stay because you're making Lois nervous.' Not a particularly good situation for a young woman in a semi-strange city. Mom had no other relatives there - Aunt Ruby (her oldest sister) and her husband, Uncle Mayer, had started off in KC but had moved to Jefferson City where he found work. So, that left no one else in KC for Mom.

Mom was friendly with Sarah Rashbaum, Uncle Mayer's sister, who told her father (Mr. Rashbaum) that Mom didn't have any place to say and could she Sarah's room. Mom was very grateful as she moved in for a week or two. By that time, Aunt Ruby and Uncle Mayer moved back to KC since his job expired so Mom moved in with them. They had a one bedroom apartment with a Murphy bed (for anyone under 50, a Murphy bed is a pretty cool bed that folds up into the wall so it doesn't hang around all day - well, I suppose, literally, it does 'hang around' but it hangs around on the wall and not on the floor where it would take up a lot of space.

I don't think Mom ever really got over the fact that Uncle Al asked her to move but she is forever grateful that the Rashbaums were kind enough to open their doors in Kansas City and give her refuge. That's what family was about back then.

So, story #1 was done but that wasn't all memory lane had in store for us. She told me a second story, which I consider a bonus - two memories in one day is pretty special.

When she and Dad were dating, there was a diner place in Kansas City, MO called Wolferman's. She said that the place was nothing fancy but had some of the best sandwiches going and was cheap to boot. Money was tight so the latter quality was pretty much the most important. Anyway, Aunt Gertie (my Dad's sister who was my favorite Aunt and visits me still daily in my own memories), Mom and Dad used to meet there after work as it was right behind the shoe store Dad worked in and around the corner from Aunt Gertie's job as a saleswoman. Mom worked close by so they'd head over for really good sandwiches and date nights.

So, as she told me the story, I dialed up Wolferman's on my Blackberry (Blackberries are wonderful things) and found that they were first opened in 1888 at the location she noted. And, they still are in business! Once home, I ordered her some English muffin bread which will be here around the 26th. Curious to see if it's really all that good but reviews on the shop are all raves. I'm hoping a bit of food from the past might trigger even more memories, which I love hearing.
Posted by Unknown at 7:08 AM