Well, John and I were at it again - headed down to Key West in August, this time for Bobbi's birthday. Sharyn came along and a spectacular time was had by all. In fact, this may have been the best trip to Key West yet.

It started with John and I picking up Sharyn at the airport just one hour after we arrived. Perfect timing! Loaded up the car and hit the road for what has become one of our favorite rides ever. John and I have a ritual on the ride; we stop at a liquor store right outside Miami for Key West supplies, then head down the road for 70 miles to a favorite bar. This time though, we hit the liquor store and then just beat feet for Key West where Bobbi was waiting.

Of course, no birthday party in Key West is complete without accoutraments such as martini glasses (no, really, martini sunglasses), tiaras (one for each girl and a King hat for the boy), leis, bubbles, and a host of other toys. So, Sharyn, John and I met Bobbi in our party rigalia and the day was ON! 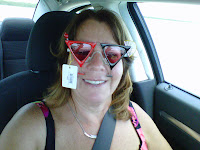 After a quick fresh up at our hotel (marvelous place BTW - Key West Harbor Inn), we waddled over to start our tour. And tour we did! We hit about every bar, laughing like idiots on every street corner. OMG. We had SO much fun. But that ain't nothin...

The next day, John and I decided we wanted to get a boat and go out to the reef. So, after getting more provisions, Sharyn, Bobbi, Skipper John and Mate Lori loaded onto a 23 foot bow runner complete with snorkel gear and a cooler - couldn't ask for more. Well, we could have but it probably would have been illegal. Anyway, off we went to the reef. The boat ride couldn't have been any more wonderful as the seas were as laid down as I've ever seen them.

We moored the boat and hopped in for a nice swim in crystal blue seas of 30 feet. We swam, we partied, we laughed. In all, we spent 4 hours at the reef even though we'd rented the boat for 8 hours.Snorkeled, had cocktails, snorkeled some more. Bobbi, who was to become knows as the official dolphin spotter spotted two beauties about 500 feet off. It was a magnificent moment and my first time seeing wild dolphins. What an awe inspiring experience.

But, even for us, 8 hours was a long time at the reef so we headed back in early. As we docked the boat, I asked the guy, also John, who rented it to us if I could get a small refund since we weren't out 8 hours. He said 'no' but, instead, he'd give it to us for another day! Holy crap! Really? REALLY! He and John had struck up a conversation earlier as he spotted John's marine tattoo and this guy was also ex marine. There's definitely a brotherhood among marines so John's service to the country netted us a nice benefit (besides freedom, of course...).

So, that night, much merriment was had, many key lime martinis were drunk, and 4 drunks wandered the streets.

The next morning (credit Lori) we borrowed some floating noodles from the hotel pool and loaded the boat up again. Headed out on glass smooth seas to the reef where we mixed up libations, tied the noodles to the boat and hopped in. Bobbi and I were the first 2 in and it was great until we saw the shark...yep, about 14 feet away. A great white, I'm sure. It must have been 10 feet long (read: 3 feet if you stretched it and probably a non-human eating nurse shark) with gaping jaws (it might have been sleeping), steaming right toward Ms. Lowe and me (lazing around the bottom eating sand...). Anyway, Bobbi and I might have won some sort of championship if there was one for getting on a boat the fastest. Now, we left John behind and he was ok with that and, as I recall, even made fun of us until he screamed like a girl when he saw the barracuda. Talk about walking on water. We had a new prophet among us.

After a few boatbound coctails, we all got our nerve back and decided that the recipe to not being scared was simply to not look down. Worked like a champ. We had the most amazing time bobbing around the ocean in 30 feet of water, not looking down. I think this second day on the reef was my single best day on vacation ever. And, I mean, ever by a mile! It was just an amazing time. Floating in 85 degree water, surrounded by dolphins swimming, the best of friends and laughter. OMG - did we laugh. I think this was also Bobbi's single most funniest ever. Every thing she said had us all howling. We must have sounded like idiots to the people sandwiched like sardines on the dive boat and we were definitely the people to know in Key West.

On the way back from the reef, we spotted a boat anchored and 3 people standing (STANDING) in ankle deep water, 7 miles off shore from Key West. Well, of course, we had to stand on the sand bar too. What a blast.


Nightfall found us wandering the streets again but nothing could top the type of day we had. If any readers ever go to Key West and have boating skills, you must take out your own boat. Unlike anything I've ever experienced.

Monday found Sharyn, John and I leaving Key West to wander back up to Ft. Lauderdale. We stayed at Pelican Cove, right on the ocean for the night before loading up for the ride to Ft. Lauderdale in the morning and the flight home.

So, home we came but not without future fun trips to Key West. John and I are headed back to our second home next week for just the weekend and then again in December. 4 trips to Key West a year feels about right (unless we can work 6 in!).

More pics will follow once I weed through my pictures to find them. And,as promised, here's a few links for your reading enjoyment if you choose:

How to save money in Key West, Florida
How to keep your cool in hot weather