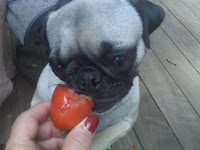 One. A single. A lone bean. One green bean - you read that right - 'ONE' green bean. One lonely bean, hanging by its lonesome. The rabbits must have missed it. Sucks. That's $500 a bean at last count.

We've harvested 4 tomatoes so far and, yes, Matee is chewing into one in the photo to the left. Who would ever think that a dog would salivate for a tomato? The little sucker ate the whole thing, except for the skin. She left the skin in pieces on the deck.
Posted by Unknown at 8:35 PM