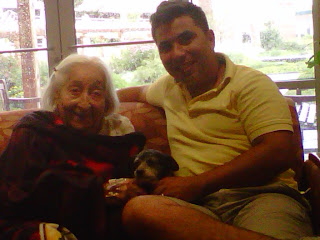 Mom is continuing to do well. She had a visit with a physical therapist yesterday who worked with her on moving around a bit. She didn't care for the activity too much but it's necessary. He had her up and walking down the hall with her walker. She was moving at pretty good speed and had gone maybe 400 feet or so when he said that she could turn around whenever she wanted to. She whipped the walker around, peered up at him and said "You said the magic words." The woman beelined back to her comfy chair.

Looks like her blood infection is clearing as is the pneumonia but she won't be released from the hospital until both are totally cleared - probably on Tuesday. That's ok though - I've gotten into the rhythm of the hospital so it's not quite as bad as the first few nights. The nurses are excellent and I've even gotten a few names and numbers for home care so I might have some more relief when we get there. I'm pooped!

Mike is in town until Tuesday which is a relief as I might be able to get out a bit more. John is sick though and is coming to the ER this morning. I fear he might have pneumonia too - I mean really....what are the chances? Poor thing can't sleep, is hacking his head off. So, we'll see what today brings. 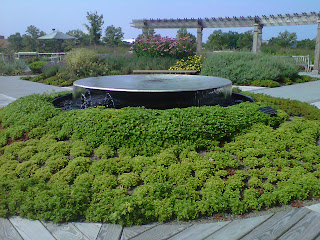 Spent a nice time in the garden outside last night with Carina, Mike, Ronnie and Linda and Mom. Mom enjoys going out and it's a beautiful garden. Quite the respite in the middle of a hospital.

More saga later as it unfolds.
Posted by Unknown at 8:02 AM