Day 3 in the Conch Republic... 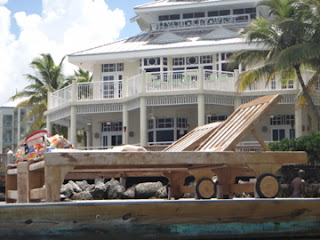 Ah, Day 3 in paradise. Sadly, it was our last day but we made every second count. We started out the day with breakfast at Cheeseburgers (again - why mess with the best?) and then headed over to the Hyatt where we clamboured aboard the swim platform with our own portable bar - no $17 drinks for us! Nope, we mixed our own through rain and shine. Swimming, floating and laughing until the normal Key West daily deluge came. Ah, but that didn't stop us. We just took the rain for what it was worth until the thunder started and we ran for cover. 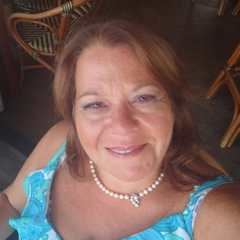 After a short nap, I headed off to get my makeup done at the Pier House Resort which, if you're thinking of doing that in KW, don't bother. Although the guy doing my makeup was more feminine than I (in many ways), I could have pretty much done the same thing. I just sort of looked like a slightly improved version of myself - not worth the $50 - that's, what? 4 cocktails....

Anyway, I met up with John and Bobbi and we headed over to the boat where John had reservations for dinner. The boat was a 33 foot Carver with a nice flying bridge which held 6 people around 3 little tables. We were served in style! After about a 15 minute boat ride to a quiet cove area, hors d'euvres, wine, and dinner ensued. It was delightful. I loved feeding the fish swimming right below us but, alas, no porpoise sightings this time...and no manatees either. But, we did have a gorgeous view of the sunset as can be evidenced from the pics below. 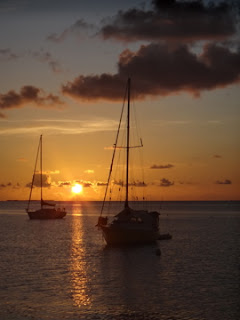 After dinner, we headed up Duval to Better Than Sex, the dessert shop. It's a beautiful setting, the interior bathed in red candles. We sat at the bar and had chocolate rimmed merlot for Bobbi and me and an apple and caramel rimmed glass of beer for John. Some sort of peanut butter concoction followed (I'm told it was the Peanut Butter Perversion....). Ah, our bellies were full but we had one more stop to make.

Under a bit of duress (thanks for the experience, Bobbi...ha), we headed over to the drag show as 801 Bourbon (it's right off Duval). With a $10 cover charge, you'd expect more than a fat purple clothed transvestite lip syncing poorly. The show was really not even third rate - just poor is a kind way to put it. Horrible is more realistic....But, I digressed. 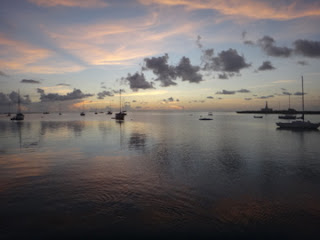 So, we sat up front and watched a few "singers' who were all pretty bad. Eventually, the fat purple clothed (people eater?) appeared and did a grotestque version of some song. When it was over, he/she asked the audience if the horrible song and ridiculous dance moves should be included in his 'repertoire'. WHAT repertoire? He was LIP SYNCING! Good grief. Anyway, everyone else there (all 11 of them) said 'yes' but I didn't say anything. Mom taught me that, if I didn't have anyting nice to say don't say anything at all. So, I took her up on it and didn't say anything. And, evidently, I got in trouble because I didn't say "yes" immediately. But, he/she wasn't going to let me go gently. Nope, he/she wanted a piece of me. So, after admonishing the audience because someone had pointed at a previous dancer and perhaps laughed (thanks, Bobbi), we were lectured because he/she was still crying backstage. The ensuing lecture was certainly directed at us and we were admonished for not allowing people to just be theirselves. Now, anyone who knows our group knows that we love people of all color, creed, or sexual orientation. WE were not the ones to direct this litergy toward....Anyway, regarding the cryer, as John said later, he/she should have put on his/her big boy/girl pants and gotten on with it....good grief. 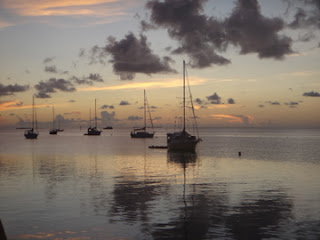 So, after we were lectured by this rather large man in a girl's outfit (which didn't fit...), the purple clothed monster again looked at me and asked me if his/her song should be included in the "repertoire." I truly didn't think so, but, taking Mom's advice, I didn't want to say 'no' and really thought it best to just say "I don't care." Well, that really set off Barney! The Purple People Eater had his/her dander up. He/she basically ran me out of the place but not before Bobbi and John took off....yep, headed on out and left me to my own wiles. Nice....Now, in all fairness, John says he didn't run off and that he was there with me. I don't remember that part....

So, I went downstairs and demanded my money back at which point the loser behind the counter said he couldn't do that so I threatened publishing my story - the first of which you're reading. I'm planning on writing the newspaper in Key West, posting on Facebook - you name it. Barney's not going to win this one.

John finally pulled me away before, he says, the cops were called and I was hauled off to jail....801 Bourbon? Entertainment? Talent? Not so much. I can only hope the poor boy/girl whose feelings Bobbi hurt stopped sobbing by now...He/she gave "drama queen" a totally new meaning.

Ended up heading over to the Bull and Whistle for a bit more window watching. We managed not to piss off anyone else, at least. So, a great night was had by all.

Headed home at the moment on a plane full of kids - Note to self: don't connect through Orlando. All in all, a very successful trip.
Posted by Unknown at 2:25 PM