That's right - we're aboard Houseboat #4, the "Leisure Craft" at a lake in Pennsylvania for 4 glorious days. Thankfully, the weather is not all that important to John nor me as it's overcast and rainy for all 4 days. But, we have everything we need in our cozy abode to keep us busy, including books, every electronic known to man, cameras (we have 6 aboard...), cocktails and plenty of camping type foods. About to make some bacon and eggs (my favorite camping breakfast) to go with my bloody mary.

Yesterday started off as a bit of a problem though everything turned out fine and no one got hurt. But, I was afraid that the day would be a big bust. Sharyn borrowed John's convertible Solara to go to NC and got hit by an 18-wheeler. The truck was trailerless, thank you God, and only clipped her bumper when going to pass her. She was on Route 95 though so was going probably 70 when this happened. The impact sent the Solara into a 360 spin and then off the road. Thankfully, she didn't get hit nor hit anything else except the ditch which came at her at a fairly quick clip. She's fine, her niece is fine and even Wilbur the dog survived unscathed. Scared us all silly though. And, going along with my belief that all things happen for the best, if she'd been in her Jeep, she would have been upside down and the accident would have been much worse. We're all so very glad all ended up ok. The car was towed to a Toyota dealership for a thorough going over (minus its bumper which was in the back of the tow truck). Damage was fairly minimal considering what it could have been but the bumper is gone and the quarter panel is crunched. Oh well, cars can be repaired - people take a bit more to fix back up. Thank you God for watching over her yesterday.

So, after John and I surmised that she would be ok to drive (mechanically and physically), we headed off to the houseboat. I stopped at Costco for gas and was about to get in line when I decided the lines were way too long and got into my impatient mode. So, I swung my convertible too close to the curb and, well, 20 minutes later, we were talking to the Costco Auto manager about whether my car was fit to drive. It was and off we went. A bit of an ominous start to what should have been a beautiful day - and still was. 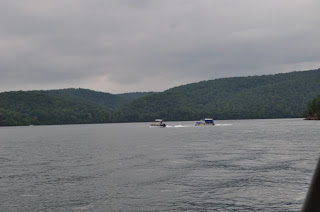 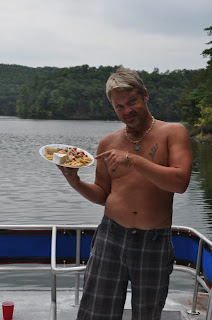 Got to the marina and checked into the boat and we were off. John and I are both enamored with the houseboat - it's got so many wonderful conveniences built right in. It's just like taking out an RV only you've got a guaranteed river or lake view. Ours sleeps 4 but they'd have to be pretty close friends as its outfitted with queen size bunk beds. The bathroom is probably slightly larger than my own bathroom in my house, the kitchen has everything one would need including a 4 burner stove, oven, microwave, and fridge and freezer. It really is a great set up. We spent last night up on the roof for cocktail hour and never made it downstairs to dinner. Had a beautiful time.

Slept well with the windows wide open, screen doors in place. Had an interesting dream where my cat, J.B. was chasing a mouse all night. I remember thinking "why am I dreaming THAT?" Got up this morning, went to grab the paper towels and, well, a picture is worth a thousand words. We have an unwanted little fella aboard. So, I stowed all food away, I hope and now it's time for breakfast.

Today, John's rib is hurting pretty badly so he's back down in bed with some pain killers while I'm going to hit the computer and type up a few articles and, obviously, this blog.

Called Bobbi at the house; Mom is doing well. I have 5 people filling in for me this weekend so I can go away - it does take a village and I have the best village around