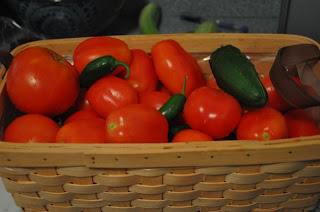 I'm sitting on the houseboat at 9 pm. It's raining out so that sound inside the boat is so soothing. John's rib is bothering him so he's in bed and I'm here just thinking. And, what I'm thinking about it my Dad.

Dad used to love tomatoes. He lived for the very day that the first tomato was ripe enough for him to eat from the vine. He'd head out to the garden with the salt shaker first thing in the morning and return, always, with the telltale sign of his raids...tomato juice down the front of his shirt.

Mom or I would ask him where he'd been and he'd get this grin, this little boy grin that said he'd done something wrong but he wasn't going to divulge unless nudged. After a second question about his whereabouts, he'd look like a 3 year old when he said "to the garden." Uh huh - we knew it. No tomatoes for our hamburgers that night.

The strangest thing of all is that, almost immediately after my Dad's death in 2007, I started to like...no...crave tomatoes. Now, I used to totally hate the things and wouldn't even be happy if they had touched a part of my salad. Tomatoes were my forbidden fruit - ugh. Why would anyone eat that? But, all of a sudden (and I do mean "sudden"), I'd see a tomato in the store and buy it. I remember the very first time I had a piece of tomato after Dad died. It was almost as though he was beside me saying "see, I told you they were good." And, I've been a lover of tomatoes since that day. I now salivate when I walk to the garden in the morning and I always have that telltale tomato juice stain down my front.