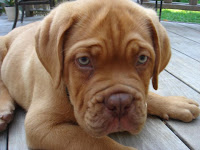 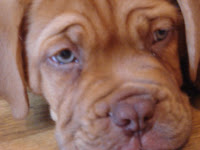 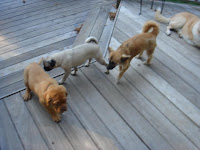 Ok, we're all in love over here with the Davids new puppy, deemed 'Scooby.' Scooby is a darling 25 lb, 9 week old pup (yes, that's BIG!), on his way to being between 140-160 lbs. He's a Dogue de Bordeaux, or, in terms of you non-dog people, he's the same breed as Hooch from the Turner and Hooch movie. Absolutely gorgeous pup. The Davids, especially David2, are already way enamoured with the pup. Barley and Hops were great with him but Killian, Rita and Matee were harded to win over. He already outweighs both Rita and Matee added together! Killian insisted on teaching him puppy manners which he did fairly gently - let's put it this way, there were no bites! A successful meeting.
Posted by Unknown at 8:28 AM

Email ThisBlogThis!Share to TwitterShare to FacebookShare to Pinterest
Labels: Dogs