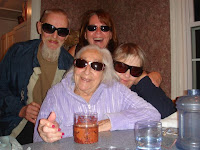 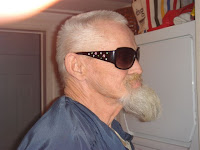 Well, Mom and I are always very thankful for each day we have together and Thanksgiving was no different - the food was just better. John, his folks - Sonny and Rose - and Mom and I enjoyed the expected turkey dinner with all the trimmings, and a few new dishes thanks to John's crew. As Sonny says - we spent 2 days cooking and we spent 15 minutes eating. True, sort of. But, what was different this year is that the guys willingly got up and cleaned the entire kitchen afterwards, leaving us ladies to languish at the table with pumpkin pie, chocolate chess pie, and nice fresh coffees, all the way around – just as it should be! Bobbi and I swapped side dishes - she was mashed (potatoes) and puffed (cheese); I was sweet (potatoes) and stuffed (mushrooms).

Mom's eyes are sensitive to light right now so the picture at the top is the 4 of us wearing our sunglasses at night. John, as predictable, was napping when this was taken. He misses all the fun. The other picture up top is Sonny, totally blinging out.

John and Sonny spent about an hour de-mousing the kitchen by fixing the holes behind the cabinets. Why on earth I hadn't figured this out, oh, 12 years ago when I first started having mice problems is beyond me. Hopefully, Mickey and Minnie will not be guests in the kitchen again. One nice side effect of having the mice around though is that I have to fully clean every cabinet at least once a year. Means that I throw out the old stuff (to make room for the new...).

Took Sonny and Rose up to the attic today to see the old house up there - when my house was remodeled many years ago, the roof on the second story was raised about 4 feet over the old, original tin roof of the farmhouse so you can see the old house up there. Quite interesting and, if I get around to it, I'll snap a picture to post. It's really a very cool attic. Speaking of which, Mom and I think that the ghost is becoming active again - at the very least, something is going on and this time, it's not mice or raccoons. Killian has not alerted though so I'm a bit leery of calling it the ghost as he hasn’t been around for about 2 years now. Killian is the only dog that alerts and follows the thing around when the ghost is around. Not sure if that’s a measure of his intelligence or stupidiness….

Mom is the only one to have actually seen the ghost. She ran into him in the upstairs hallway a few years ago when she was coming out of the shower, wrapped in a towel. Interestingly, I specifically had not told her about the ghost as didn't want to spook her (pun intended). She saw him on her own and was not the least bit put off about him being there. Dad, on the other hand, did not like the dude. The ghost used to grab his ankle in bed. I always thought Mom was goofing on him but she swears it wasn't her. He’s a very warm spirited ghost though. I’ve had people who claim to be psychic tell me about him when they’ve walked in the front door. And, I specifically remember coming to this house when my friend, Sherry, owned it back in the 80’s. I remember coming in the front door and feeling an overwhelming feeling of welcoming. That’s what this old house is…great place. Well, except for the mice (grumble, grumble).

While I was up in the attic, ran across a box of old photos and yearbooks that Dad must have stashed up there. Have spent a few hours scanning in some old pictures and will work with Mom to identify who is who. A lot of our family background is not known as we originated in Russia (Minsk) and, evidently, there’s not a lot of information available about the original family. The pictures are fun though. I have noticed that I do suffer from 4th child syndrome in pictures though – there’s a thousand pictures of #1 child, Mike. There’s 2/3 as many of #2 Ron. There’s 1/3 as many of #3 Steph. And, little Lori? Well, there’s 3 so far, in toto…hmph….The good thing is that I still look like myself (anyone every see that Bill Cosby routine about ‘don’t I look like myself?’ If not, find it on the web. Funny…. Anyway, even in the pictures of when I was 2 or 3, I still look like Lori, only littler. Don’t get me wrong – I was never little. The other picture down there is my Bubie, Dad's mom, Fannie Burdoo nee Zivirin. I still have gorgeous watch which is hanging around her neck. I believe she was around 18 in this shot. 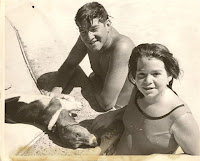 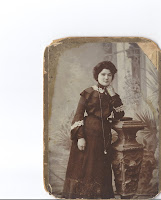 Oh, update on Mom - when we went to the doctor last week, he removed the two most irritating stitches which we though would help with the pain. It did, but temporarily. She's still not up to her game although, after 2 whiskey sours yesterday, she reported that she no longer cared. Back December 15th after another very long 3 weeks.
Posted by Unknown at 12:54 PM