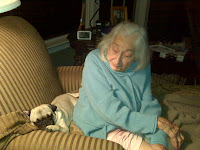 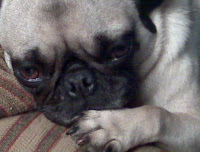 ...that is the question.

Had another follow-up appointment for Mom at the eye doctor's last week. Mom and I both noted that he was very very excited to see her doing as well as she is doing. That kind of struck us both as 1) either he didn't think she was going to do very well after the complication from the surgery or 2) he was covering his tracks by not telling us before of the possible implications. Interesting, to say the least. Anyway, the remaining stitches will dissolve so we don't have another app't for 4 months. And, the BEST part of the whole thing is that we're now free of the dreaded 4 hour drops! What a difference that makes in the routine of the day as we both were living in 4 hour increments. Now, she can sleep through the morning without me having to wake her for drops and I get to go out for longer than 3.59 hours! Yahoo!

A few days ago, she noted that she could see the tissue box out of her left eye so some sight is returning. She's been 100% blind in that eye for many years so the return of the sight is also meaning that she's light sensitive. She sits around the house most days in her cool shades - John says she's doing her Jackie O impression...

Anyway, her appetite is returning in full force, which is good. Her humor? Back 100% - whew! She's been cracking me up on a fairly regular basis again. 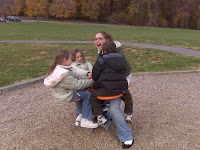 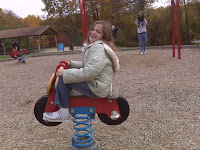 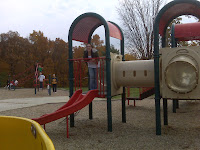 Pictures to the left are niece Monya's children when they came to visit recently. I actually took all 4 to the local playground (by myself!). They're great kids and easy to be around so that was a great time.

As long as Mom is ok, am hoping to head to the cabin to host a Christmas brunch for John's family - which appears to be growing! His mom and dad are here as will be his brother, sister-in-law and niece from Arizona. So, lots of people and lots of dogs at the Mansion West.
Posted by Unknown at 6:55 AM