Horrible singers were on. I said to John 'that guy was horrible!' Mom pipes in with 'that's why I don't audition.' I suppose the fact that she has NO talent escapes her. She's doing well though and reports that her eye is much better. We've backed off the eye drops and it appears as though she's clear of the pain, finally. Her vision is coming back which is quite interesting for both of us. She surprises me by seeing things clearer close up that I can. I frequently have to ask her to read a recipe to me. 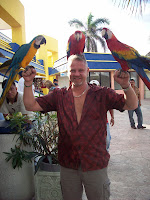 John and I just returned from a great cruise to Cozumel for 4 days (where he made us take cheezie tourist pictures like the one on the left). We had great weather all 4 days and much fun was had by both of us. We still haven't seen the inside of a cruise diningroom, having forgone formal dinners again. We did manage to make an 8:45 reservations at Chops restaurant on board though. If you're ever on the Navigator of the Seas, the $25 cover charge is well worth the money. As the ma'tre de seated us in a great private velvet booth he said it was reserved for 'young couples or newlyweds' - we didn't disuade him of either of the notions as the seat was da bomb! But, it did leave us giggling. We also managed to partake of Johnnie Rockets grill one night - that was delicious as well. Great burgers. Cozumel saw us doing some minor shopping and then heading to an all inclusive beach resort. The drinks were perfectly horrible, the food mundane but the ocean - OMG. Worth every penny of the cover cost. The best part though, of the whole trip, was when John and I took out a small catamaran for a quick sail. John mastered the thing in about 30 seconds and we were up on plane (bow of ship is out of the water) and rolling along at around 10 knots. He brought the boat back with great mastery. The guy who runs the concession even told him that he had been watching John and was amazed at how quickly he got us going and how great he was at just sailing the ship (into the wind!) right back where we took off from. We've decided that one of these small boats is in the future sometime. 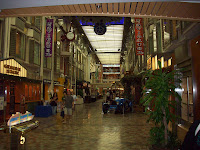 The Navigator is the nicest ship I think I've ever been on. The middle of the boat is the promenade and is amazing (picture on the left). Every night finds a party going on down there. The shops are also quite nice with very high end stores. I nabbed a great Guess bag as a thank you for Bobbi for helping out with Mom. And, we got a few great cigars to enjoy on the wonderful balcony off our room. Great trip, except for the night at South Beach where the cold I'd been fighting came on in full force and put me to bed for 17 hours of sleep. John was wonderful in tending to me, and we spent the evening watching tv with me dozing - was sorry to miss all the action outside but it was still a nice evening. 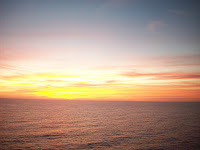 Sunrise on the left.
Came home to find Mom healthy and happy after being cared for by dear Sophia and Bobbi. I always love when Sophia is here as there's always wonderful homemade chinese food stocked in the fridge - always a nice homecoming. What wasn't a nice homecoming though was to find that dear Rita had popped up at least a pound (a lot when you started off weighing 15!). Turns out that Mom decided to feed her about 1/2 of what Killian (who is 62 lbs!) got. So, strict diets abound here now. Mom's taken to telling Rita 'Not now, Lori's looking' whenever Rita jumps up and looks in vain for her '2nd breakfast' of mom's leftover toast with butter (butter must cover the toast for Rita too). Someone's spoiled and we won't mention names.
Very cold out the last two days so I've had the wood stove going pretty much at full bore. It's nice and very very toasty in the living room - Mom says she's plenty warm. Me? I walk around in sleeveless tops and barefoot. Shorts are next.
Posted by Unknown at 9:15 PM