If Moses won't go to the mountain.... 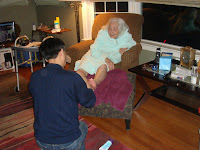 ...then we'll bring the mountain to Moses! Sophia was kind enough to hook us up with a man who came to our house and gave mom and me foot massages. John got a foot and back massage (not sure how that happened!). At any rate, it was well worth the money - he was here 2 full hours and we all felt like spaghetti when he was done. Am just hoping Mom doesn't expect the royal treatment very often!

And, to top it off, dear Sophia brought us a homemade chinese dinner - the spring rolls were da bomb and were gone in a flash! She used a different filling for them this time so they were different but delicious. Sophia and Rita don't have much of a love affair (Rita's fault) but we're working on it. 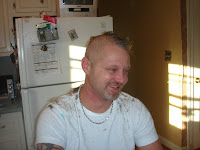 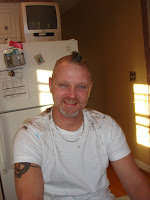 John decided it was time to go for his hair to go in prep for our trip down to Florida, but, before he shaved his head, we had to have some fun. So, at the left is my version of a mohawk - it's dyed blue but you can't see it...shame, it was a nice touch. Now, normally my victims are drunk for me to do something like this but we were all stone sober - imagine that!


On another front, Bobbi, Mom and I decided to mix up the order for a quick picture the other night so we made Mom stand up! You can't really tell because she's so wee (or we're so gigantic!). 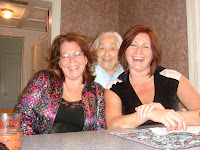 eHow articles continue to come pouring out - I'm at 82 articles and climbing. Here's the latest:

How to Get A Boat Loan

How to Unlock the Secret to Lasting Love
How to Take a Beautiful Photo of A Sea Gull
How to Keep Your Dog Entertained With Indoor Games
Posted by Unknown at 6:55 PM