It takes a village. 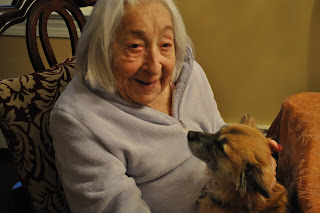 This post was actually drafted a few weeks ago so the news is not that new but thought it was important to post for a status update on dear Gert:

Had a bit of a hard time here lately as Mom's doctor (a nurse practitioner who is delightful actually) suggested oxygen 24/7. When we were in the office and she took mom's pulse ox and it came up at 86, I thought 'uh oh.' Sure enough, she's basically starving for breath if not on O2. Shoot...


So, enter oxygen tanks which 'exhale' on their own as they turn room air into pure oxygen, a world of making sure that portable tanks are filled, a huge oxygen cylinder in what used to be the 'dog room.' Life, dear readers, as we knew it had definitely changed.

I remember thinking that Mom wasn't really registering what a difference it was about to be in her life when Phyllis, her nurse practitioner, ordered oxygen 24/7. I, sadly, did know so had a bit of a difficult time trying to explain it to Mom as though it was a 'good' thing. It's a huge change to the life of a 94 year old. It means that she has to be tethered to a cord 24/7. It means that someone needs to be up everytime she needs to get out of bed, or walk into the kitchen. And, with animals around???! Oh, hell no! What if the cat decides that this new cord is a play toy? What if a dog trips and pulls it out of the oxygen tank? Immediate panic set it.

I should have known better. The tanks were delivered and placed strategically around the house. The dogs were outside when this was happening. After the service guys left, I let the dogs in and learned another valuable lesson. Every single dog explored the new tanks, the cords snaked around the house, and looked at Gert quizzically. The cord ran into their spot on the chair so they did sniff around. And then...And the...here's where the lesson comes in.

Each and every dog, and the cat, after examining the hoses and deciding that they weren't a threat, each and every dog and cat walked over the hoses and settled back into life as we knew it previously. They accepted this new 'norm' and didn't react negatively or panicked or, well, anything.

Now, Mom and I were not quite as accepting at first. She was pretty upset when the reality hit in that she was going to be tethered to this beast every minute. So, we lived just 2 days like that and then I decided to make the executive decision to give her more freedom. When it comes to quality vs quantity of life, in our minds, quality wins out. So, the deal we struck (and shook on!) was that she had to wear the O2 at night while sleeping (this could not be compromised) and she had to wear it when sitting in her chair. But, what this means is that she can still come into the kitchen and 'cook' with me, she can still sit on the balcony, we can still go to the mall (I will, however, always have the portable tank with me in the car just in case...).

Here's where the village comes in:

Since Mom really can't be left alone more than an hour or so these days, Carina, thankfully, is here from 10-6 every day during the week and friends are filling in as needed so John and I can get out on the weekends. Ron and Linda have also dropped by a few times which was very nice to break up the day. And, Mom and I are just adapting to this new way of life. It's not so bad really and, if it means that she's less confused and happier, well, that's just peachy.

So, she's doing much better and is actually liking the oxygen now. It's clearing up a little fogginess in her mind and certainly giving her more energy. She's also eating like a PIG with a new addition of an extra breakfast (we're up to 3 now), 2 lunches, 2 dinners and a few snacks throughout the day.
Posted by Unknown at 7:02 AM