Wow! It was just an amazing storm that blew through yesterday anddropped over 6" of snow on The Mansion. John and I sat in the hot tub for almost two hours, witnessed 3 branches biting the dust under the heavy, wet snow and really enjoyed the moments. The best part though was when a FLYING SQUIRREL visited the bird feeder at 8 pm! Now, I grew up in Maryland and have long known that flying squirrels were around but never have seen one. This guy was just about 10 feet from where we were sitting in the tub and soared from the 'potting shed' (probably the old potty) to the bird feeder, about 15 feet away. He didn't quite make the feeder and landed at the bottom of the statuary holding the feeder. In just a moment, he jumped up the 6' to the feeder and had at it. Very very neat to watch.

Mom had a very slow morning yesterday, having taken off her oxygen a few times last night. She's definitely needing the O2 during the night in order to be really 'with it' during the morning hours. She's had 3 really good days in a row so today was just a sort of 'off' day but it was ok anyway. I'm was on it last tonight, having set my alarm to get up and check that the O2 is on. She's still an amazing woman....

I took her out a few days ago to run a few errands as it was a balmy 45 degrees. After getting her dressed in 4 layers, she informed me that it was just like dressing a 'Barbie' doll. Um, not quite. I had her so bundled up that she could barely move but she was at least warm! We were going to meet John out for a cocktail but he was running late from work so we just came home and got in jammies - Gert's favorite part of the day.

Catching up below with some pictures of some favorite times and friends: 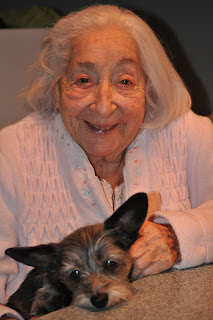 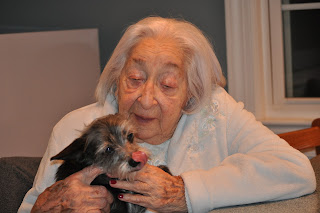