Has it REALLY been two months.... 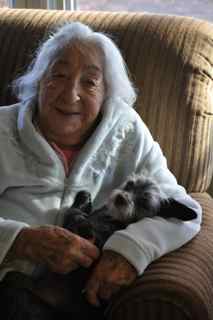 ....since I blogged? Well, no excuse except life around here has been fairly busy for the following reasons:

1. Dear Gert. Mom is doing fine but is a bit more of a handful these days. She was put on oxygen a few months ago and hated it! She was really miserable and so was I so I made a pact with the Devil (that would be Gert). She must wear her oxygen at night and when sitting in her chair in the living room; otherwise, she's free to roam. She agreed, grudgingly, so at least I won that small battle. Sort of. I get up every 2 hours to check her at night and her stubborn streak frequently comes through as she's sleeping like an angel with her oxygen dangling from her hand. When she wears her oxygen though, her mind is clearer. Speaking of...

I suppose it's just the normal bane of being a 94 year old but her mental capacity is, shall we say, slipping. Now, sometimes, this is sort of amusing for us both. She'll say something that is totally off the wall and then we'll discuss what she thought she meant. Like, for example, the other night, she told me that the oxygen dudes were running around her room. Now, this would have been an interesting conversation if it hadn't been held at 2:30 am in her bedroom. So, I just put her back to bed and assured her that I had talked to the 'oxygen dudes' and they'd stay still. She was quite happy with that.

We still have the occasional happy hour over here when friends drop by for a bit. And, she still loves when the dogs are in her lap as she dozes in the chair. So, all in all, she's doing pretty good.

2. Poor Rita had to have emergency eye surgery last month. The right lens in her eye dislodged and moved to the front. She was in a lot of pain and, of course, it was a weekend (why is it ALWAYS a weekend?). Off we went to the emergency vet with a trip to a specialist opthalmologist on Monday for the surgery. The poor thing was stuck in an e-collar for 12 days which was interesting. I got pretty good at figuring out how to help her adjust.

So, we managed to keep her eye in her little head (although I did volunteer that it could come out....) but she's on drops for the rest of her life, 3 times a day. Well, she's still worth it. 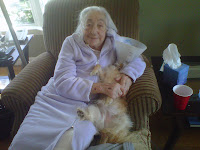 Mom was quite instrumental in Rita's recovery, holding her for hours a day as hey dozed in Mom's chair. And, Mom always reminded me when it was time for Rita's eye drops - it's interesting how Mom's mind works these days. I'd forget but she'd remember! Go figure.

And 3. I broke a rib! Oy, the tzoris! The emergency room staff told me that I must have found the last patch of ice in Montgomery County when I slipped on Bobbi's cement steps outside and landed square on my back on the edge of a step. Knocked my wind right out! John wanted to run me to the hospital but, noooooooo....that was too easy. Instead, I waited until 3 am to wake him up to run me to the hospital as the pain was so great. This was last month and, right now, I'm finally to the point where it only hurts when I sneeze. But, for a while there, I was in agony when I laughed which was quite an issue for me. I swear that John and Mom went out of their way to be funny....

So, as you can see, I had reason to have been taking a rest. I have been cheating on this blog though with some other websites that I've been exploring, specifically Squidoo. This is a site where you build what they call 'lenses' which are actually itty bitty web pages. So far, I've made a huge 23 cent but, hey, you have to start somewhere. I remember the first day I made 3 cents at eHow - I'm over $200 a month on that site alone now. Not too shabby! Anyway, on Squidoo, we can put anything we like on a lens so I've been writing mostly about dogs.

I just started helping out a local rescue, and here's my first page about one of their dogs up for adoption: 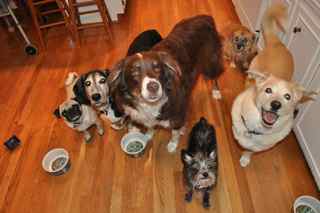 Annies Orphans Dog Rescue Of Maryland Introduces Hummer! That's him to the left. He looks to me to be a spectacular fella so if you know someone who needs someone to love, come meet him at the next adoption show. I, on the other hand, do NOT need someone else to love. We're full at the inn with 6 dogs and a confused cat who was missing from the picture at the rights.

I figure that I'll try to spotlight one dog a week for their dog adoption organization in the hopes of marketing a few of their dogs and finding them homes quicker.

Here's a few of my other articles:

My lens about dear Rita
And Killian
And, finally, wee Gizmo

And a few other lenses about various stuff:
Some ideas for delicious dessert shooters (mini-desserts)
And, since John and I plan on retiring to Key West, we were going down there quite frequently. Here's a lens about Key West Tours.

I also started a blog about Good Movies for Senior Citizens. John gave me an Apple TV so I could easily dial up Netflix for Mom. I've been searching for movies that she might like. Please give me some comments about any movies you think would be suitable. They have to be easy to follow!

Ok, that's enough catching up at the moment. I'll try to be better - I swear!