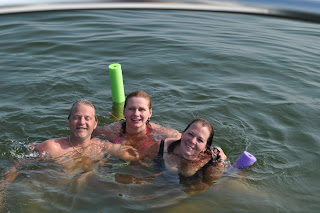 Yesterday found friends Jeff and Bobbi touring the Chesapeake on Namaste along with Skipper John and First Mate Me! Since Namaste is a hybrid sail/motor boat, the plan was to motor over past Tilghman Island to Harrison's for some delicious crabs, which we did, although we did have two detours along the way that we need not mention in print. Suffice it to say that one detour was my fault and the other was our wayward Skipper's...

Quote from the day "Hey, aren't we back at the bridge?!"

Anyway, the crabs were a bit small but still very sweet and delicious. Bobbi and I definitely got our fill.

We headed back but, alas, there was no wind so we motored to the middle of the bay where the fun started. Swimming! Jeff, being the weenie that he is, refused to join in but Bobbi, John and I acted like idiots out there. John sort of lost his trunks which brought much laughter to the peanut gallery. After a quick change, we were on our way again. So ended another fabulous day of laughter, sun, crabs, and much fun on the Chesapeake!