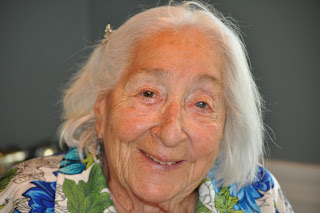 Ok, so first, it was the 3D laptop that is really something! I mean, the picture on the computer monitor is so 3D it's a little freaky. So, the next logical purchase was a 3D camera. I can't WAIT to show this stuff to friends and family!

John shot a still photo of Killian and, in 3D, it looks like he's coming right through the monitor. As John says, Killian is sort of frozen in time as he is still but his head follows you wherever you move - reminds me of a picture of my Dad's grandmother (Sanasora) that we have. Back in the day (1800s), Jewish women wore wigs and looked very severe in photos. This particular photo used to hang in my Aunt Gertie's house and I think it was Ron who was scared to death of it. It now hangs in my foyer and is still a little creepy...

Anyway, with the 3D camera, the pictures sort of come alive as you move. It's very strange and interesting.

John's been taking some videos of Mom lately which is very sweet and will be nice to have in the future. It's kind of weird though as the 3D videos are like watching a miniature Gert. It's like you can touch her, Very weird indeed.

We're supposed to go to Mom's dentist today, but she's quite confused this morning so that trip is off. Not a problem though as I think she healed faster than I would have - no ramifications at all (or pain) from having the tooth root pulled last week. She's been brushing daily with flouride toothpaste in the hopes that we can keep the rest of her teeth in her head!

I just got a prescription for a hospital bed for Mom as she can't easily get into be alone which means I have to be up more at night. If Lori ain't happy, ain't no one happy and getting even less sleep than normal is not good for me. So, we should have that bed on Monday. It will be nice as it can be lowered or raised so it will work better for both of us.
Posted by Unknown at 6:32 PM